An analysis by David Calvert

‘UFO hunters claim mysterious ‘floating cigar’ hovering in the sky behind snowboarder is proof of aliens.’ 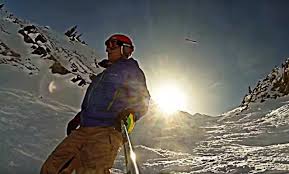 The above still and caption headline is taken from the ‘Mirror’ online newspaper, published on 29th January 2016. It purports to show a cylindrical UFO which was captured on the snowboarders Go Pro video camera. You can see it clearly over his left shoulder. The video was forwarded to my Facebook page by Sheila Dawson Wilson, who thought it was ‘impressive’ enough to send it to me.

Before I address my image analysis conclusions, I’d like to cover an issue regarding the statement that the sighting is ‘proof of aliens’.

Witnessing an anomalous dark mass in the sky, is certainly not proof of aliens. How on earth the UFO enthusiasts can claim that the footage has captured proof of aliens is beyond me. Since the acronym UFO means UNIDENTIFIED Flying Object how could they conclude that it is of extra-terrestrial origin? The operative word here is “Unidentified”. At face value it looks very impressive, but then again there a countless faked videos which are equally as impressive. The cylindrical anomaly certainly bares many characteristics associated with the cigar-shaped UFOs witnessed throughout human history. It even appears to have an energy field surrounding it, which theoretical physicists have hypothesised could be due to the propulsion systems employed. But is this irrefutable proof of aliens?

‘Inferences are based on evidence. To infer, we must collect evidence. And evidence is collected by the process of analysis.

Analysis is a particular form of investigation. In general usage, analysis refers to any close, careful, or systematic examination. In the discussion here, the term “analysis“ is used in its more technical meaning. Analysis is a process of investigating something by breaking it into parts for closer examination. Complex topics are broken down into simpler ones. Intricate patterns are broken down into less complicated elements. A problem is simplified by limiting the amount that must be examined at any one time.

The goal of analysis is not simply to discover parts within the whole, but to understand the whole. Once the parts are identified, analysis then seeks to determine how those parts are related. From a recognition of the nature of the parts, and the relationships between the parts.’

So where is the relationship between the anomaly and alien’s in this case? Their is no tangible evidence to connect the two.

I conducted a visual analysis of the 3 “stills” from the video, and noted the pixilation pattern surrounding the anomaly was different to those of the overall image which indicated the images had been edited, particularly image 1 (above).  I sent off the images to an independent analyst who corroborated my findings that the images showed distinctive signs of having been tampered with.

Following the independent analysis it was concluded the images could have been created with either of the following: