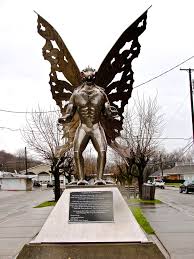 The “Mothman” is categorised as a ‘cryptid’, an animal whose existence or survival is disputed or unsubstantiated, such as the Loch Ness Monster.

The first newspaper report of this flying cryptid appeared in the Point Pleasant Register dated November 16, 1966, and has since become a cause célèbre and part of regional folklore. Mothman was later introduced to a wider audience by Gray Barker in 1970 and was later popularized by John Keel in his 1975 book The Mothman Prophecies, claiming that there were  supernatural events related to the sightings, and a connection to the collapse of the Silver Bridge. The 2002 film The Mothman Prophecies, starring Richard Gere,was based on Keel’s book.

Mothman Sightings Prior to the Silver Bridge Disaster.

An Analysis by Jan Harold Brunvand, an American folklorist, researcher, writer, public speaker, and professor emeritus of English at the University of Utah,  noted that Mothman had been widely covered in the popular press, some claiming sightings connected with UFOs, and others claiming that a military storage site was Mothman’s “home”. Brunvand notes that recountings of the 1966-67 Mothman reports usually stated that at least 100 people saw Mothman with many more “afraid to report their sightings” but observed that written sources for such stories consisted of children’s books or sensationalised or undocumented accounts that fail to quote identifiable persons. Brunvand found elements in common among many Mothman reports and much older folk tales, suggesting that something real may have triggered the scares and became woven with existing folklore. He also records anecdotal tales of Mothman supposedly attacking the roofs of parked cars inhabited by teenagers.

Certain aspects of the Mothman mystery spilled over into subsequent decades, suggesting that similar creatures were witnessed at other major disasters at the time, or shortly thereafter. The 1986 Chernobyl disaster is one case in point.

Fortean scholar Loren Coleman touched on the folkloric aspect of such stories of winged creatures.

“John Keel and I openly discussed with the media, and did our best to straighten out the record regarding the mythos that became the Chernobyl “Mothman” accounts.

The Chernobyl story, the Galveston Hurricane-Mothman tie-in, and other examples given in the 2002 movie were pure fiction. As you note, right after the movie was released, various websites posted the Chernobyl/Mothman sightings as factual. But there is not one thread of evidence that any winged weirdies were witnessed before the Chernobyl accident. It is a bit of movie fiction that has, unfortunately, moved into pseudo-factoid cryptozoology.” 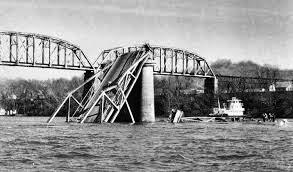 “I was walking in the woods with my dog near an abandoned house at about 5:50 a.m.,” Waffles told Cryptozoology News. “I peered inside the window of the house and saw what appeared to be a winged humanoid hanging from a door frame. My dog saw the creature and remained completely still and silent while staring in its direction,” he added.

Waffles claims the humanoid was still with just its chest “moving up and down as if it were breathing”.

“I was very startled at first, but the creature didn’t notice me because as soon as I saw it I took cover behind a nearby bush.”

The teacher said the unknown being was about 6 feet tall with an approximated 10-foot wingspan.

“It was hard to tell because the wings were wrapped around its body, similar to a sleeping bat,” he said. “It was black and had webbed wings similar to a bat. It had a human head but slightly more round and it had hair. It was like the Mothman.”

The encounter reportedly took about 15 seconds before the man left the area.

“I was walking out of the hospital doors having explored the surroundings,” he told Cryptozoology News. While I was inside, I had heard a noise which was similar to a large monkey rustling around the tree tops.”

Wan says what happened next was “one of the most terrifying experiences” of his life.

“As I left the building, I saw the creature. It appeared to be halfway up one of the trees with huge wings stretched out from its body, which appeared to be mostly human.”

Then, says the student, the “animal” emitted a “high-pitched shriek” so he ran away in order to get out of the area.

“I felt as if the creature was hunting me, or else was surprised to see me in its territory. It seemed to look in my direction before I ran off. When I turned around, it had completely disappeared,” he explained.

Wan described the creature as a 6-feet-tall winged humanoid covered by a black “leathery skin”. Its head was rounded and looked “vaguely humanoid” although, he explains, it had a nose and a mouth that appeared to be full of “sharp fang teeth”.

“I was unable to see its eyes properly because it only appeared for a short amount of time. I have never seen any other animal or human like it,” said Wan.

He says that even though he had a camera with him due to the work he was doing for the future film, by the time the humanoid being showed up he had already packed away his equipment.

54-year-old avid birdwatcher Alice Yimdale said she was looking for birds near Dempsey Hill when she spotted the being inside the abandoned building last Sunday.

“It was 2:30 p.m. when my husband and I went to the forest looking for birds, I do love a good bird watching session,” she told Cryptozoology News. “This is why My husband and I live in Singapore, a hub of beautiful birds. We like this place because, unlike our house, it is quiet and tranquil.”

Yimdale reports that as they came near an empty building, she heard a “loud fluttering noise”.

“I was confused, so I decided to investigate… this is when I came across the thing.”

The woman said the being looked like a tall man with an “enormous” wingspan.

Reportedly, the creature appeared to be barely moving and could have been a male or a female.

The couple maintained they had never seen anything like it before and that the 3-minute-long sighting was a “bit scary but exciting”.

Cryptozoology News asked the birdwatchers regarding the lack of photographic evidence of the alleged incident but there was not an immediate response.

Whether it be a myth, legend, fantasy, extra-dimensional entity, hoax, or true living cryptid, I suspect we have not heard the last of the Mothman.