“These objects streaked across the sky so fast that they were undetectable to the human eye. I count five in the picture, flying in some type of formation.”

On analysing the above images I have come to the conclusion that the “UFOs” are nothing more than particulate matter on the car’s windshield. The conclusions are based on the following observations:

The telegraph cable above the car is partially obscured by the far right object, showing that it is between the car and the cable, and is not distant.

The largest of the objects is quite blurred, indicating that it is quite close to the camera lens. The blurring is not due to motion. If it were it would look more like the comparison image below. It also bears strong characteristics to that of an insect impact against the windshield.

There is no apparent motion blurring from any of the objects, suggesting they are stationary and were close to the camera lens at the time the photograph was taken. 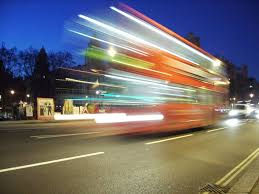 Motion blur is the apparent streaking of rapidly moving objects in a still image or a sequence of images such as a movie or animation. It results when the image being recorded changes during the recording of a single exposure, either due to rapid movement or long exposure.

The witness claims that he did not see the objects at the time he took the picture, and speculated that the objects must have been travelling too fast for the human eye to see. On seeing the photograph he also stated that they were travelling in some kind of formation. There is no evidence to suggest any kind of flight formation whatsoever.  As for the former declaration of their speed, I believe he was just trying to make some kind of sense as to why he didn’t see them in the first instance. He may not have even been aware of the debris on the windshield at the time due to his focus being trained on the traffic ahead. He makes no mention of who actually took the photograph.