In Egyptian mythology Sekhmet was originally the warrior goddess, as well as a goddess of healing for Upper Egypt. She is depicted as a lioness, the fiercest hunter know to the ancient Egyptians. It was said that her breath created the desert. She was seen as the protector of the Pharaohs and led them in warfare. Her main cult centre was in Memphis.

“Many have been asking so here is a response I posted to someone explaining the event: “Hours before this encounter a fellow traveller came to me and we had an interesting conversation. This was his second time in Egypt and the second time we travelled together. He was commenting on how others were getting interesting pics in the temples and how in the two years he has never even got a single orb. He had the same camera as last year and I looked at him and noticed he was in a very negative space. After a conversation he felt lighter and I wished him that something that he could not explain would happen to him on this journey. Hours later after we left the temple he came up to me with a very puzzled look on his face. He asked if he could show me something and I said yes. He told me he was watching

me in the other chamber when I activated the energy device and decided to go into the Sekhmet chamber to take pictures and he then showed me these photo’s; I looked in awe and asked him repeatedly if these were taken during the activation of the device and he said yes, yes, yes! I saw the photo’s minutes after while we were walking through the temple and I will guarantee you they are untouched and genuine. Needless to say my friend was shifted greatly after this experience and had an expansive trip beyond anything he could have imagined. What allowed this to happen is he allowed a 1 percent possibility that there are great mysteries that are happening and all we have to do is allow ourselves to shift just a fraction to open this up to us. I was so grateful for this event and my friend allowed me to transfer these photos and use them. There 30 others that will attest to this experience as they all saw the pics on the bus as we drove back to the hotel. What I do I do as a gift to others. You are invited anytime to visit my research facilities in Santa Monica. Actually my good friend Greg Roach posted a similar comment 4 years ago about one of my videos thinking it was done in post. I invited him to experience and since then we have had 3 amazing trips to Egypt together. Sometimes you never know what lies ahead. All we have to do is allow possibilities…1 percent!

The technology I was guided to bring is of ancient understanding. It is called “The Beacon” a Zero Point (Unified) energy field I was guided to return to this planet as a life agreement. I have been in honor and humility as I travel the globe to sacred sites as the activations slowly return the knowledge of what we really are.”

After arriving to the temple after the most intense Mystery School Journey I was guided to activate the Zero Point Field to stabilise the grid energy. After confirmation I transcended into another realm and before me a portal opened up and 3 guardians appeared. They each reached down and placed Mana containers in my hands and offered me to absorb them into me. That night I went before the 3 guardians again … 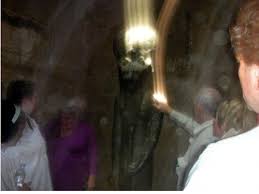 “The confirmation of the energy streams as we are in the other chamber activating the Portal. These photo’s were taken at the exact time the portal was opened.”

Analysis of Above Image.

What causes the variation in light colour in the above image is the two different materials from which the light is reflected. Note how the reflected light from the hand has a flesh tone to it. I conducted a simple experiment to test this hypothesis. I stood a red-jacketed book on a sheet of A4 paper and shone a small torch at it from an angle. The reflected beam onto the paper took on the same colour as the book face I did the same with green and yellow jacketed books and the same thing occurred.

A further question arises: What is the source of the light? The image below of an adjacent chamber perhaps gives us a clue. However, as we can clearly see in the above image the light source appears to be directly overhead and not coming from the rear wall. 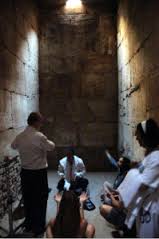 One of the members of the group, William Henry (leader of the tour), contacted me regarding this. What he had to say more or less confirmed my suspicion.

concerning my query as to

I can’t recall exact details about the light source in the Sekhmet chapel. It seems to me that the chamber is not lit. When the door is closed there is total darkness, except for a possible skylight…

By now you will have naturally asked yourselves why the light appears ribbon-like and wavy. Surely, it would be a straight, solid column?

I suspect the skylight is not a simple opening, as shown in the Chamber Light Source Image above, but is probably a grid of some description. Light passing through such a grid would naturally appear as separate columns or ribbons.

Though there are no EXIF details accompanying Sekhment images, one can see that a flash was used by the way the shadows closely surround objects in the foreground – not to mention the presence of orbs! If the photo had a long exposure, combined with flash (like in ‘night mode’), then a light source just outside the frame could definitely show up as a trail like this. the fact that the light reaches the edge of the image frame suggests this is the case. Clearly, the statue itself is not the light source. The fact that the trails are not parallel suggests that the camera moved in  a relatively complicated way after the flash went off. Usually you see a fairly straightforward light trail indicating that the photographer simply lowered the camera in a straight line, wrongly believing the shutter to be closed.

The motion blur in the below image is irrefutable confirmation of the camera being moved whilst the shutter was still open.

The Presence of Orbs:

For more information on orbs and light trails go to http://www.assap.ac.uk/newsite/htmlfiles/Photos.html

To the uninitiated these photographs look very impressive. The location itself evokes in the human psyche an air of mystery and wonder. Our expectations and mindsets further colour whatever interpretations we place on such apparent anomalies. In learning how to interpret such imagery one has to put aside their personal expectations and beliefs and approach it with an unbiased mind. This, I hope, I have done to the best of my ability.

The science of photographic analysis, like so many other scientific disciplines, requires that all theories and findings need to be replicated before they are accepted. To this end, I enlisted the aid of the Association for the Scientific Study of Anomalous Phenomena (ASSAP). Their independent analysis corroborated my initial suspicions that the anomalies in this case have a mundane explanation. Orbs and light streaks are relatively common occurrences in photographs and share certain identifiable characteristics, as in this case. For example; of all the orbs in these images not one is partially occluded by an individual or object, as is possible with a genuine subtle ‘energy plasma’ sphere. In such a confined chamber filled with people one would expect it to happen. This, along with their internal structure patterns, led me to conclude that they are dust particles captured within the camera’s field of view and illuminated by the flash.

There is also further evidence in these images supporting the theory that the sun is the lights source. The angle of incidence (the arrival of a beam of light or particles at a surface) changes slightly on the statue suggesting the light source is moving. Without EXIF details this is difficult to prove, however.