UFOs come in many different shapes and sizes, from the traditional saucer-shaped to the more exotic. They have been witnessed throughout human history and have been photographed, sketched, painted, written about,  filmed, and categorised, yet we are still none the wiser as to their true origins.

The images and brief histories below are just a sampling of what the fledgling UFO investigator might come across in his early studies of the phenomenon. He would, therefore, do well to familiarise himself with the following. 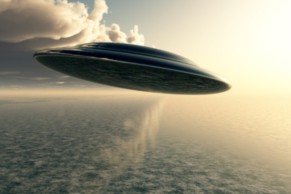 The term ‘flying saucer’ was first coined in 1947 by an anonymous Hearst copy editor, following the sighting of nine UFOs over Mount Rainier on June 24th of that year by Kenneth Arnold. In reality Arnold never described them as flying saucers but was misquoted when he said that they flew like a saucer would when thrown across the water. He wasn’t alluding to their shape but their motion.

This picture shows Kenneth Arnold holding up a depiction of what he actually saw. Clearly, it is more boomerang-shaped than saucer-shaped. 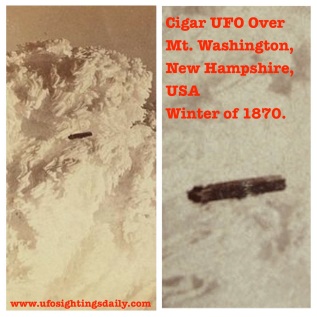 Depending on the source, this image was shot either in 1870, 1880, or 1896. It was supposedly taken in New Hampshire looking at Mt. Washington. It bears the classic cigar shape seen in the USA during the latter years of the 1880s. A more accurate term to use when describing such objects would be ‘Cylindrical’.

‘Mystery airships’ or ‘phantom airships’ as they became known were reported world-wide in the late 19th century and are a class of unidentified flying object. They are seen as a cultural predecessor to modern UFOs. Some ufologists believe the airships were human-built dirigibles witnessed during test flights. However, no records of any successful flights have ever been discovered from the  period. Cigar and dirigible type craft share many of the same characteristics. It is therefore difficult to separate the two types, although generally the cigar is the larger of the two. 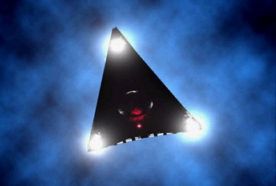 The triangular UFO, aka ‘flying triangle’ (FT) has  reportedly been witnessed from the 1940s to the present day. However, phenomena consistent with modern-day sightings have also been reported throughout recorded history, using the language of the times. FTs are generally described as enormous, silent, black triangular objects. They are frequently seen at night, hovering or slowly cruising overtly at low altitudes over cities and highways. On each corner of the triangle there are “running lights”. They can be  bright white or pulsing coloured lights. A single light is situated at the centre of the aeroform. This class of UFO is reported as being visible to radar, as in the famous Belgium UFO wave of the 1980s.

This picture was taken in Calgary, Canada, on April 8, 2007. The witness described it 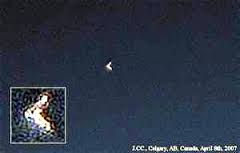 as a ‘boomerang-shaped craft’ with ‘discernible structural elements’. It was silent and without a contrail.   On May, 2007, a similar craft was seen in Germany, described as being approximately 80 ft wide and 75 ft high, silver coloured and highly reflective. It had an orange glow at the front and a dome at the rear, along with lights at the bottom. As the witnesses watched, it ‘cloaked’ then uncloaked in a matter of seconds.

Bell Craft. This is a rare craft and not enough data has been accumulated to give its general configuration.

Box Craft. This is a rare craft. Box-like appearance, no lights, and silent.

Conical Hat. This is a comparatively rare craft. One of these UFOs was reliably estimated to be in the region of  200 metres in diameter. Colour is metallic silver, both dull and polished. They appear to vibrate heavily. When moving slowly they seem to jerk or jitter. 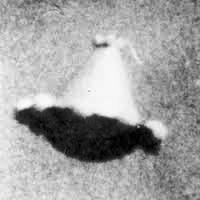 Cross Craft. These craft are incredibly rare. Their dimensions seem to vary from jet-fighter size to extremely large. Colours for this UFO vary, but several have been seen with white lights at the cross extremities and red or bright red at the centre, occasionally pulsating. On several occasions smaller, bright orange or green, craft have been seen to join and leave the main craft. The main craft also has the ability to ‘fade’ in its appearance. Electrical disturbances have also been reported with this UFO.

Diamond-Shaped UFO. The exterior of this craft can be as polished and as dazzling as a mirror in bright sunlight. The range of colours reported for this UFO are from white to black, and just about every colour of the spectrum in-between. Its size range can vary, but the general estimate for it is about 18 ft across and 8 to 10 ft high. There is seldom any noise associated with this craft. Electrical disturbances are connected with it.

Domed Saucer. Of all UFOs this is the most instantly recognisable. The dome disc shaped craft has a relatively low profiled cupola, and they are generally flat or convex on the bottom. Their size can range from 10-15 ft in diameter, to several hundred or more, and they are generally one of the most common UFOs reported. Colour ranges from a brightly polished metallic silver to a dull aluminium. The flat-bottomed versions of this craft are often darker underneath in a center circular area. Grounded craft have been seen to have retractable landing gear. A characteristic of the domed saucer is that it is surrounded by an ionized atmosphere which gives them a mist shrouded appearance. Their speeds have been confirmed by radar at up to 9,000 mph. 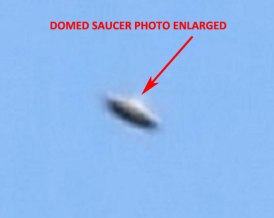 Double Hat UFO. Dimensions for this craft vary in size from 1 to 30 metres. They have a brightly polished silver colour to a dull aluminium appearance. Flat bottomed saucers are often darker underneath. When seen at night they are solidly lit in red, orange, amber, yellow, blue or blue-violet, and brilliant white, combinations. At night the edges of the craft are indistinct, due to the halo that surrounds them, obscuring their edges. Like the conical hat UFO they can display a jittery or jerky movement. At close quarters these craft can be heard to give off a buzz, hum, or whine. 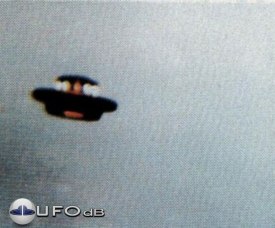 Egg Shaped UFO. This type of craft has been witnessed flying with its long axis vertical. Its configurations ordinarily range in the 1-30 meter range. It is also equipped with retractable landing gear. Their sound can be anything from a roar to a hum, buzz, whine or whirr at close quarters. When flying it may have a light swish-of-air sound, or may run silently. It has been witnessed in multitude of colours. The Socorro Landing is perhaps the most famous case of an egg-shaped UFO encounter. 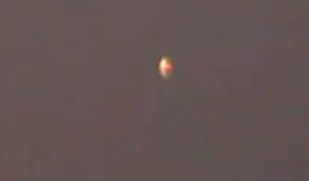 Horseshoe Craft. The terminology used by witnesses when describing this UFO ranges from ‘horseshoe’, ‘magnet’, and ‘U-shaped’, for obvious reasons. What we know of this craft is that its size varies from that of a large airplane to several times larger than a jumbo jet. Its body often appears black and is highly reflective. Its perimeter lighting has been seen to be yellow, yellow-orange and non-blinking. Despite its habit of low-level flight, no sound has been heard emanating from it. This craft does not appear to bank when turning, but rotates, as is common of vehicles of this size.

This is by no means a comprehensive view of UFO types, but merely a sampling of the many types the fledgling UFO student will encounter in their study of this fascinating subject. Omitions from this list include: