The Devil’s in the Details. 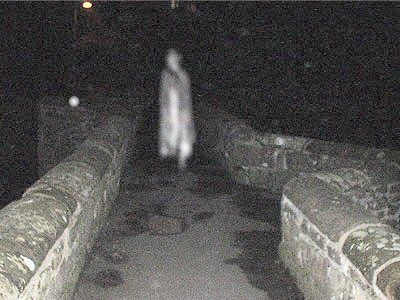 ‘Ghost hunters from Cheshire Paranormal Society (CPS) took this photo on a vigil of the historic Packhorse Bridge in the village of Caergwrle, near Wrexham.

At the time members hadn’t realised what was apparently standing on the bridge in front of them, said John Millington from the group, but some group members had reported feeling uneasy.

Also, other paranormal activity was a allegedly recorded, such as orbs of light, several of which can be seen in this photo in varying stages of luminosity.

Through further study and assistance from members of  Hope and Caergwrle Heritage Society, it’s thought that three ghosts haunt the bridge; a young girl and two women.

CPS members believe this photo shows the ghost of Squire Yonge who, the history books say, was well-known in the area 300 years ago.

The group also believe that the sighting of ghosts on the bridge could be to do with a former burial ground in the area and that the bridge was the access point.’ 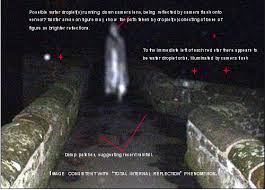 My annotations, thoughts and observations on this image read thus:

Top line notation: “Possible water droplet(s) running down camera lens, being reflected by camera flash onto sensor? Fainter areas on figure may show the path taken by droplet(s) collecting at base of figure as brighter reflections.”

Second line notation: “To the immediate left of each red star there appears to be water droplet orbs illuminated by camera flash.”

When viewing this image one can easily understand how the ‘ghost’ interpretation can be easily accepted, especially by those who adhere to such beliefs. At first glance the image looks very impressive but, as they say, the Devil is in the details.

The damp patches on the ground, the light orbs, and the ghost figure itself are all created by the same thing – atmospheric water droplets.

Most of the orbs are faint, whereas one is much brighter. The reason for this is because the brighter orb is much closer to the flash and therefore reflects its light with greater intensity.

The figure itself has been created by water droplet(s). In this instance, however, they are on the camera lens and are being reflected onto the camera sensor creating a total internal reflection. The shape of the figure is purely coincidental. The fainter areas of the figure are where the droplet(s) have run down the lens leaving a residual track as they did so. The brighter areas are where the droplet(s) have much greater density and so reflect more light.

Further research into known images of total internal reflection support my hypothesis that the same phenomenon is occurring here.

2 thoughts on “THE PACKHORSE BRIDGE GHOST.”